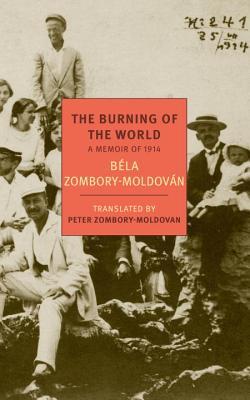 The Burning of the World: A Memoir of 1914 by Béla Zombory-Moldován

The Burning of the World is the translation of a personal diary kept by Béla Zombory-Moldován during the first year of World War I.  The author was a young Hungarian artist who was on holiday abroad when war erupted in Europe in August 1914.  He quickly returned home, reported for duty (he was a reserve officer), and was thrown into the chaos that was the Eastern Front at the beginning of the Great War.  He writes of his feelings about the war, his concern that it isn’t quite as glorious as everyone is saying, and the sheer terror and chaos that he found in his first battle.  The end of the book tells of his injuries and the three months he spends convalescing, trying to forget all that he has endured and will endure.

While the writing is quite beautiful at times and evocative of the place and time, it could be rather choppy and disjointed at other times.  One thing I found difficult was that the numerous notes were at the end of the book.  Since the author was not writing for publication, these notes were often essential to determine who people, places, and situations were.  Yet having to constantly flip to the back of the book to read them interrupted the flow of the narrative and I had a hard time staying with it.

I was glad to read a bit about the Eastern Front as I had not read anything about it before this, but I suspect that there are other memoirs that would be clearer and easier to understand than this one, which is a shame since there are moments that the author’s thoughts and words really connected with me.  Recommended, with reservations.

A Bunch of Sweet Peas by Henry Donald

In 1911 the Daily Mail, a British newspaper, offered a prize of 1,000 pounds for the best bunch of sweet peas.  Expecting 15,000 entries, they were inundated with over 40,000 entries, among which were the flowers of an obscure Scottish parson and his wife.  The story follows the steps the parson and his gardener take to grow a beautiful bed of sweet peas–only their second year growing them–, the drought that threatened to kill the flowers only weeks before the competition, the trials to determine the best way to send them by train, the judging, and the final decision.  I listened to the audio, narrated by Judy Dench, which was a delightful way to “read” this story.  I will probably want to read it again as I’m sure I missed some of the details and because it is just so heart-warming.  It’s a sweet little story and was the perfect choice for lying in bed with the flu.  Recommended.

View all posts by Joy O'Toole

A Cat, A Book, and A Cup of Tea
nuakh

Notes Along the Way